Our hair is an integral part of our life. And just like some people have more hair on their heads, some also have more facial hair than others. Though it is common for men to have excess hair growth on their faces, women often don’t have much facial hair. But that is not the case for every woman since some women naturally experience hair growth in the upper lip, chin, chest and back like men. And whether a few random hairs are popping up on the chin, upper lip or another facial region, the presence of facial hair is more than irritating for many.

We performed thorough research and chatted with a few dermatologists to write an informative article for you that will help you know the reason behind excess hair growth on your face, how to diminish the appearance of facial hair and how to get rid of them permanently.

Read this article till the end to get answers to every question that you have in your mind regarding upper lip and chin hair growth.

Why Does Upper Lip And Chin Hair Growth Occur?

But suppose you are noticing more than just a few hairs on your upper lips and chin area that are coarser than others, or you have seen a sudden increase in facial hair growth. In that case, you need to pay attention since excess coarse facial hair in women may signify some medical conditions requiring treatments.

All women typically grow a few hairs on their chin and upper lips. It occurs due to the vellus follicles in women’s bodies that produce delicate, tiny, light-coloured hair referred to as peach fuzz. Those hairs help regulate the body temperature. During puberty, the vellus follicles become large in size n making terminal hair darker, longer and coarser. The hormones that play a pivotal role in the enlargement of vellus follicles are androgens, usually present in men at a high level.

And when the androgens present in women’s bodies shift their level periodically because of weight gain, ageing and other factors such as menopause and pregnancy, it can result in more terminal hairs in unexpected places like the chin and upper lip.

There are also times when the chin and upper lip hair is a red flag there something is going on with your health. It is precisely when excessive facial hair occurs. It can be a condition called hypertrichosis. And the type of hypertrichosis that occurs in women is called hirsutism.

Hirsutism is a condition that causes excess hair growth on specific body parts, mainly affecting women and people assigned to females at birth. There is no known cause behind hirsutism, and it is considered a symptom of other conditions like polycystic ovary syndrome.

But since the growth of dark and coarse hair is the only visible sign, it is often difficult to tell the difference between typical terminal hair growth and hirsutism. But hirsutism may occur if someone has a family history of conditions like congenital adrenal hyperplasia and polycystic ovary syndrome. Obesity is also another reason for increasing the chances of having hirsutism.

Hirsutism is common in Hispanic, South Asian, Middle Eastern and Mediterranean people, but it doesn’t affect children before puberty.

What Are The Other Symptoms Of Hirsutism?

Virilisation is when a person develops the secondary sex characteristics of men, which occurs when the androgen level is high. Androgen is a group of sex hormones that play an essential role in men’s life, from when they enter puberty to when they mature physically.

With virilisation, some of the secondary sex characteristics that women may develop include:

What Are The Other Causes Of Hirsutism In Women?

As we mentioned earlier, in most cases, hirsutism does not have any known cause. However, several conditions may cause hirsutism, including:

Read more about How Much Does Laser Hair Removal Cost in Hyderabad?

How Is Hirsutism Diagnosed?

If the only change you have noticed in your body is abnormal hair growth on your face, you must reach out to a healthcare professional to know whether or not it is hirsutism. A healthcare provider conducts a few physical examinations to determine the extent of uncommon hair growth alongside noting other physical signs that may accompany the hair growth, such as acne.

Once the healthcare provider has diagnosed hirsutism, they use the Ferriman Gallwey score to determine the severity of the condition. The score effectively examines nine areas of a woman’s body, including the chin, chest, upper lip, lower abdomen, upper abdomen, thighs, upper back, lower back and upper arms.

If the scale indicates a low score, it means that the hirsutism is mild, and when the number goes higher, it suggests it is more severe. After examining all nine areas, the healthcare provider adds the scores together. It is common for a white or black person to have a total score of less than 8. In the Mediterranean, Middle Eastern or Hispanic people, a score of less than 9 or 10 is standard. But Asian people’s total score should be less than 2 to be considered typical.

What Are The Treatment Options Available For Hirsutism?

Hirsutism is often treated with a combination of different treatments, and below, we will discuss some of the most common treatment modalities physicians prefer to treat hirsutism.

Read more about What Are The Side Effects Of Laser Hair Removal?

Whether you notice hair growth on your upper lip or chin area due to hirsutism or naturally, if you want to remove them permanently, you must know about the treatment modalities available. Since any hair removal is a cosmetic procedure, we will discuss some of the most common cosmetic treatments for permanent hair removal that help people deal with excess facial hair growth.

Electrolysis is the procedure used in removing individual hairs from the face, including upper lip and chin hair. With time the electrolysis devices have become more advanced in destroying the growth centre of the hair with heat and chemical energy. In this treatment, a trained electrologist is assigned to insert a thin wire into the hair follicle under the skin surface. An electric current moves down the wire and reaches the bottom of the hair follicle to destroy the hair root. Since the hair follicle is damaged, hair growth is prevented, causing the existing hair to fall out.

For over a century, electrolysis has been used for hair removal treatment. Electrolysis was first invented to remove irritating ingrown eyelashes, and now electrolysis is an FDA-approved procedure for permanent hair removal.

During electrolysis, medical practitioners use a device called epilators that can successfully destroy the growth centres of the hair using an electric current.

During electrolysis, the electrologists or medical practitioners use a thin needle that is finer than one hair strand’s density. They insert the needle into the opening of the hair follicle and then pass a small electrical current to destroy the hair growth cells. The area where the hand is entered might feel a little hot temporarily.

The doctors generally suggest several appointments for electrolysis to achieve permanent hair removal. The number of sessions differs from one person to another depending upon the patient’s unique situation. Typically the doctors suggest one appointment every week, and in some patients, the appointments might last for one year or more.

Several factors impact the length of individual electrolysis sessions, including the area of hair growth and the density of the hair. Since the upper lip and chin are small regions, it can last somewhere between 15 minutes to 30 minutes for an electrolysis session to get over.

Electrolysis is a very safe procedure; hence there are no life-threatening or harmful side effects. However, in some cases, the patients experience scarring or infection after electrolysis, and in most cases, those side effects occur because the electrolysis was not done correctly. However, the risks of electrolysis can be avoided by choosing a certified and professional electrolysis practitioner.

It is short-lived and common if your skin feels a little red during or after the treatment. People with darker skin may have temporary dark spots on their skin that fade over time without using any bleaching cream on them.

Read more about How to Remove Body Hair for Women?

Laser hair removal is a non-invasive cosmetic procedure for removing unwanted facial hair using a beam of light commonly known as a laser. Primarily on the face, it is used around the mouth, cheeks, and chin. Previously when the laser was invented, it was the best possible treatment option for people with dark hair and light skin. But due to the advancement in laser technology, now laser is a suitable procedure for anyone dealing with unwanted facial hair.

According to dermatologists and plastic surgeons, laser hair removal is one of the most efficient non-surgical procedures around the globe.

Before beginning the laser hair removal procedure, the dermatologist thoroughly cleans your face and applies a numbing gel if the area is sensitive. Since the chin and upper lip are both prudent facial zones use of a numbing gel is quite common. The dermatologist also gives you a pair of goggles to wear and covers your head to protect your hair against the laser.

Read more about Is Pubic Hair Removal with Laser Painful?

In some cases, serious side effects of laser hair removal include:

Why Do I Have Hair On My Upper Lip And Chin?

Hirsutism is responsible for excessive hair growth on the body and face. It is caused by an increased production of hormones called androgens. For women, hair growth may occur where men often have much hair, but women often do not. Hair growth occurs due to hirsutism in the chin, upper lip, back and chest.

There are many ways to get rid of facial hair, including plucking, shaving and waxing. However, shaving or plucking does not produce permanent results since the hair can grow back faster or thicker. Electrolysis and laser hair removal are two permanent solutions to eliminate upper lip and chin hair.

Does Having Too Much Facial Hair Mean Hirsutism?

What Are The Side Effects Of Different Facial Hair Removal Methods?

Skin irritation and redness are the most common side effects of electrolysis and laser hair removal. But both of them are safer as compared to shaving and waxing since they can cause skin cuts or may lead to ingrown hairs. Plucking, however, hurts, especially if many hairs are removed and if those hairs are thick and coarse. Using wax on the face is unsafe since it can burn the skin.

What Is The Best Hair Removal Method For Me?

Electrolysis and laser hair removal is safe techniques for removing unwanted body hair, especially facial hair. However, one must talk to a dermatologist to know the best method. Remember, every hair removal method mind include specific side effects that can be avoided by taking precautionary actions suggested by a dermatologist.

In this article, we tried to simplify the idea of removing upper lip and chin hair permanently, which is that if someone is not comfortable having facial hair or has certain unidentified health conditions that lead to growing upper lip and chin hair should be concerned about facial hair removal. However, even after being diagnosed with hirsutism, many women choose to live with facial hair, which is entirely personal.

Hopefully, this article helped you know about terminal hairs and hirsutism and other causes that lead to the occurrence of facial hair growth in women. Keep following us for many such articles.

How To Get Rid of Dark Circles Permanently

Tue Sep 20 , 2022
Did it ever happen to you that you met someone and the first question they asked you was whether or not you were sleeping well? And if you wondered how they know, it is undoubtedly because of the dark circles under your lower eyelids, sometimes accompanied by bags, that invited […] 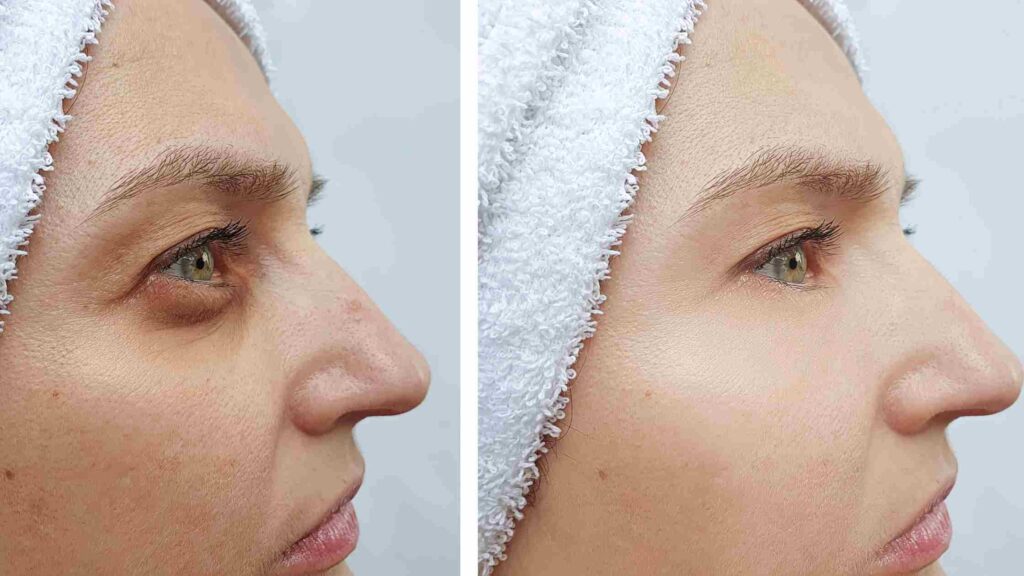